BACK TO NEWS BACK TO SPOTLIGHT

In the fourth quarter of 2017, the Coleman Foundation approved grants totaling $1,103,000 to non-profit organizations in support of the health and rehabilitation program. These grants advance strategies articulated in the Foundation’s Impact Plan.

Receiving grants in this program area are:

This award is to support the NICU Transition Baby Steps Program. La Rabida created and formalized the Baby Steps program to provide care for infants who are transitioning from hospital intensive care and prepare families to care for their children at home.

The award is to introduce the organization’s medical education program to 500 Chicago healthcare professionals, creating greater awareness of ovarian cancer and leading to earlier detection.

This award is to support creation of the Palliative and End-of-Life Care education program. The EPEC Surgery program will be an adaptation of the core EPEC curriculum and will consist of a series of modules to educate and train surgical teams to address the palliative care needs of patients with life-limiting illness. After the EPEC Surgery program is created and piloted, it will be offered to Chicago-area surgical programs and disseminated more broadly.

This award is to support the CPMTP over three years. The program is co-directed by Dr. Sean O’Mahony at Rush University Medical Center and Dr. Stacie Levine at the University of Chicago Medicine. Training will be directed at site teams in Chicagoland area hospitals, which may include administrators, physicians, nurses, social workers and chaplains. The aim of the program is to grow the palliative care workforce to deliver quality palliative care to patients with a life limiting illness with a particular emphasis on cancer patients.

During, Phase I and II (between 2012-2015), the CPMTP has targeted all domains of palliative medicine education, as shown by the model below: 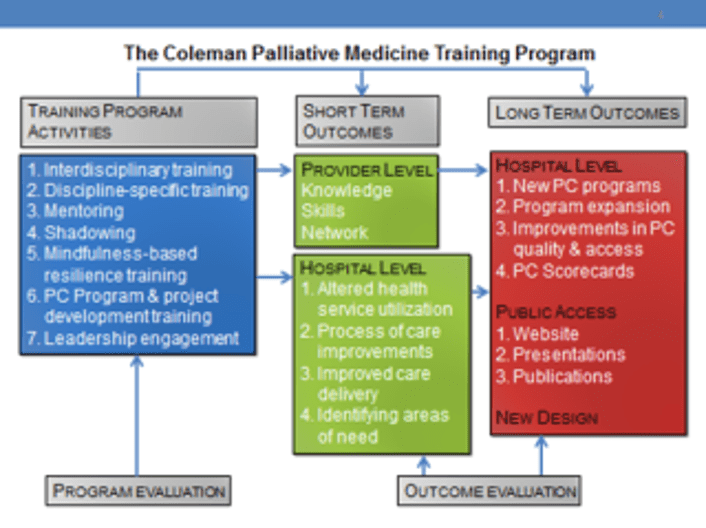 Between 2012-2015 of the CPMTP, the number of inpatient palliative care consultations increased by 139% across participating sites. Several programs established or grew their ambulatory palliative medicine clinics, thereby increasing access to supportive care services across the continuum of care. By 2016, across 19 organizations a 92% increase in growth of their teams was reported (mostly doctors and nurses, not social workers or chaplains). While we can note accomplishments during this time period (2012-2015), palliative care quality is not a matter of staff counts alone. The experiences of phases I and II have added nuance to understanding the barriers that can slow the pace of change, or make new services difficult to sustain. Phase III activities will continue to address the overall gaps in palliative care, palliative care services, and workforce development.